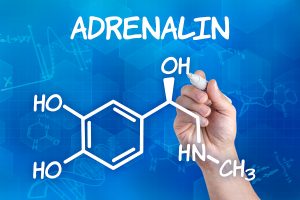 Let’s look at another essential  drug that is required to be in every dental office…Epinephrine…Also known as Adrenalin.

Why do we need to have epinephrine in the office? Why is it an essential drug?

An acute severe allergic reaction can happen to anyone in the dental office…whether you’re a patient or someone in the waiting room i.e. one may be allergic to the latex in the dentist’s gloves or an individual with a severe nut allergy, who is just sitting in the waiting area near someone eating nuts, may be triggered by the aroma of the nuts.

It is an endogenous catecholamine. Endogenous refers to substances that originate within the body.

Catecholamines consist of hormones and neurotransmitters. The main ones are dopamine, norepinephrine (noradrenaline) and epinephrine (adrenaline). Have you ever heard the expression, the adrenaline is flowing? This occurs when an individual is feeling anxious, stressed, angry or excited. When the adrenaline is flowing, it affects both the respiratory (breathing) and cardiovascular (pumping action of the heart) systems.

Effects of Epinephrine on the body systems…Let’s get technical.

What Does this all mean?

To help us better understand the above (1-3), we will look at what happens during an anaphylactic reaction.

Anaphylaxis occurs during an acute allergic episode and it can be life threatening. An acute allergic reaction can result in the following:
1) Hypotension – low blood pressure.
2) Laryngeal edema – swelling and accumulation of fluids in the area of the vocal cords.
3) Bronchospasm – tightening and closing up of the airway passages that lead to the lungs.

The above are the major signs of an anaphylactic reaction.

The less severe signs of an allergic reaction are hives, itching, rash and redness. These ‘less severe’ signs can be treated with Benadryl (diphenhydramine)….we will look at Benadryl in the next blog.

How does epinephrine reverse an allergic reaction?

Epinephrine ‘corrects’ the three life threatening symptoms mentioned above and it does so by acting on the three receptors mentioned previously. It reverses the severe effects that are occurring so quickly within an individual…time is of the essence…there is no time to spare!

Epinephrine has to clear up this whole situation…and quick!

It acts on the various receptors mentioned previously and increases blood perfusion (flow) to the area that needs it the most…the brain.

Action on beta one receptors: This acts to increase the force of contraction of the heart. This results in more oxygenated blood being delivered to the brain.

Action on beta two receptors: Epinephrine acts on the Bronchial system (relates to the lungs and proper breathing). The epinephrine acts to reverse the bronchospasm or ‘closing off’ of the bronchi. It acts as a bronchodilator.

Epinephrine acts rapidly and has a short duration of action (5-10 minutes). After 5-10 minutes, 911 have usually made their way to the dental office to help deal with the emergency. Otherwise, another dose of epinephrine can be administered if necessary (usually 10-15 minutes later).

This was a very technical blog.

I hope anyone reading this was able to appreciate how important epinephrine is in dealing with an acute and severe allergic reaction. This is why epinephrine is a key drug to have in the office…it saves lives!

Yours in excellent dental health, 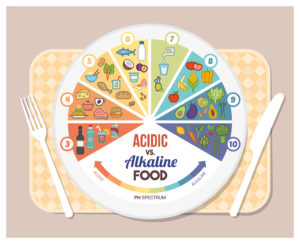 PH of the Mouth – Part Two

Dental Erosion and How to Treat It

It’s true what they say…a picture is worth a thousand words. The accompanying images are 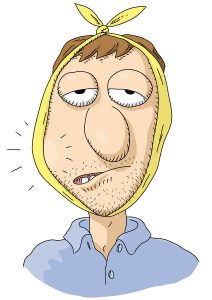 When a swelling is small and localized to a specific area, we treat it with

What to Expect During a Root Canal

In our last blog, we asked, “how do you know if you need a root 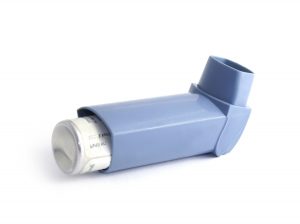 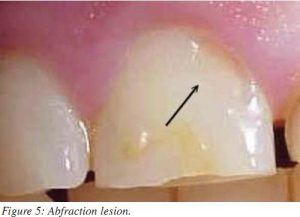 We conclude our series on dental wear with a brief discussion of Abfraction. This